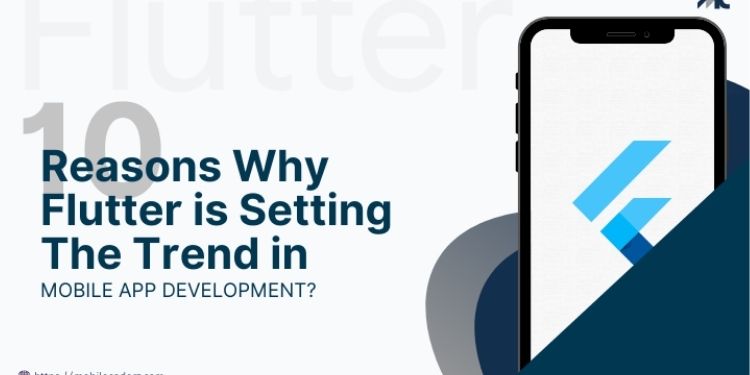 App development companies are getting enormous growth and popularity. The technological industry has seen multiple innovations and is developing continuously to transform into a better version. Developers who indulge in app building show interest in getting exposure to the latest frameworks, gadgets, or libraries that could assist them effectively in developing robust applications, Flutter is one of them. It is the main reason that most businesses also want to invest in Flutter app development services.

Google Flutter has been considered as the most demanding UI development framework introduced in the year 2017. In the live event of Flutter organized by Google in 2018, mobile application developers found an opportunity to know about flutter language. From where Flutter started to get great recognition and popularity. In recent times, the brands like Hamilton, Google Ads, EMAAR, Alibaba Group, Philips, are using Flutter to achieve cutting-edge application user interfaces.

Important reasons behind the popularity of Flutter:

Flutter is the open-source framework introduced by Google. It helps in the easy posting of technical problems and facilitates access to documentation using the developer forums. Flutter programmers find it easy to learn new things and do progress with the advanced changing population of developers who majorly contribute to the forums. The framework is capable of enhancing the productivity of the coder that results in delivering cost-effective projects.

It is one of the remarkable features of Flutter. The ‘write-once approach of it differentiates it from others. It has removed the traditional limitations associated with the cross-platform approaches where developers had to use separate codes for each platform. Now, developers implement the same code for Android and iOS operating systems.

Flutter has been considered as a powerful framework that is capable of reducing the additional efforts of developers and users. So to maintain the application design, quality, and speed, taking flutterapp development services can be a better option.

Flutter uses Dart as the programming language. This is just like an internal language of Google. Dart has been defined as a one-source and normally used language. The app developing professionals of all levels find this language easy and simple to work with in comparison to other languages.

Dart is not only useful for mobile app development frameworks but it can also be used for developing web and desktops apps.

You should know that widgets have an important role in the appearance of the application interface. Flutter-based apps contain lots of widgets that include fonts, navigation, scrolling, etc which can be customized according to the screen size. There is no confusion in accepting the fact that Flutter is an effective framework that ensures a seamless UI experience when compared to another framework.

Flutter-based mobile apps can run smoothly on any existing platform without making any change to the Dart code. Besides this, it even preserves the outstanding design on distinguished platforms. App development with Flutter has already done a lot of improvements and has gone far away. Whether it is mobile, web, or desktop, the framework can be used for all. So, it would be ideal for businesses to approach Flutter app development company to get smart apps.

It is a specific feature of Flutter that assists developers in seeing instant changes in the code implement by them. All updates would be available to developers and designers in few seconds. There is no need to wait for the updates and professionals can continue to use Flutter to build other features without facing any complexities. This boosts the performance of developers and creates possibilities for developing robust mobile applications in less time.

To render itself onto a provided platform, Flutter uses Skia. With the help of this engine, the user interface developed by using Flutter can be easily launched on any platform virtually. It simply means that you don’t have to do adjustments in UI to move it to a different platform. That is why in India, companies have started to avail flutter app development services to boost their performance.

Apart from the user interface, most mobile applications depend on advanced operating system features like Bluetooth communication, GPS coordinates, gathering sensor data,  working with credentials, permission handling, and many more.

While developing an app using the flutter framework, all these features would be available through an inbuilt plugin supported by Google.

Flutter made it easy to establish the communication between platform-native code and Dart using the platform channels. This way, anything can be implemented to a flutter-based app that a native app is capable of doing.

MVP(Minimum viable product) shows the mandatory functions and features of a mobile application. If the app is built on Flutter, then it is compatible across all platforms and ensures a user-friendly experience. This helps in inviting investors to invest in projects of Flutter

The testing process means checking the compatibility of an app on different platforms. As Flutter apps use one code base for all platforms, there is no need to perform repetitive testing. It can save a lot of time and money spends on app development. That is why companies are taking interest in taking Flutter app development services.

There are multiple reasons behind selecting Flutter for developing mobile applications. It is getting more popularity because of its extensive benefits. The above-written post will guide you in understanding the benefits of using this technology for building advanced mobile applications.

The Erema Winter is an experienced Flutter app developer. He has got expertise in developing high-performance and scalable apps for different platforms at MobileCoderz. Apart from development, he has an interest in sharing his in-depth technical knowledge with those who show interest in the technical domain.